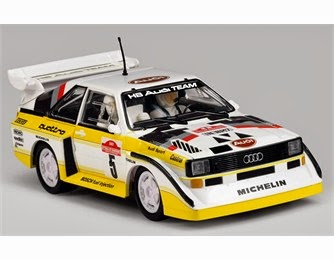 So Scalextric have decided some of the greatest rally cars from the 80's, the RS200, 6R4, Audi Quattro.

I have done video reviews for both the 6R4 & RS200. But as I haven't got my camera to hand and it's been really busy of late, I decided to do this one by typing. I have just spent the last 8 minutes running the car through its paces.

The model its self is really good, the detailing design and even the paint job are superb, looks really good going round the track. Can not grumble about the model at all, or its performance.

Technical spec:
Normal motor on a side winder mount, same as most cars, making the back end heavier than the front end, fairly normal layout there, but the magnet position is under the rear axle allowing for increased grip on the rear, this is handy though it makes the front end a little light and it can deslot as the front lifts from being tilted upwards with that much down force on the back end. This is not a bad thing, as you can counter it by breaking to get the nose down, but with a solid front axle do you want to get the nose down quickly through a corner?

I haven't taken the car to bits yet, as I don't really like the under-pan, it is formed in such a strange way I am unsure if it is screwed in and clipped in or just screwed and the body fits lose. I am unsure as I sit here with the screwdriver as it feels really tight fitting to the body and really I only need to adjust it if the guide breaks, motor packs up or the wires snap.

Rear tires are slightly rounded which I find annoying as they are not putting down 100% of the rubber on the track and I am also going to hazard a guess they are using the sports plus compound for the tires themselves as they are really hard to sand flat, this linked with the fact they are so thin and tightly wrapped to the wheel itself. Also with the lowered magnet position now sitting flush to the gear edge any reduction in the tire depth could result in the car grounding out on the track itself.

It's a nice car though, possibly needs a couple of grams added to the front end to keep the nose down, and set some reasonable times on Donington Layout.